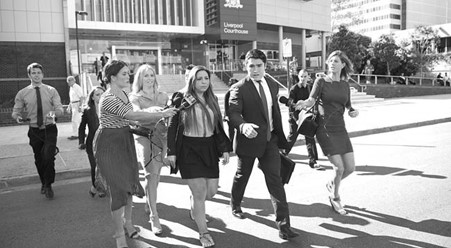 A WOMAN accused of faking her own attempted abduction is standing by her version of the “terrifying” afternoon, telling a court she had no idea why police went from “praising her, to now condemning her”.

Aida Chehadeh made headlines in January when she recounted the moment three men in a red hatchback pulled up beside her in Liverpool and one tried to drag her inside.

Her ordeal sparked debate about whether Australia had become a selfish nation after Ms Chehadeh, 29, claimed dozens of people witnessed her daylight attack, yet no one stepped in to help her.

But a fortnight after describing how she feared she may be the next victim of a gang rape or a murder, Ms Chehadeh, from Rockdale, was charged with making a false representation to police. Her initial statement sparked a police investigation which included the release of a computer-generated image of the alleged suspect.

Police then alleged they obtained CCTV of Ms Chehadeh smoking in the laneway behind her Liverpool workplace at the same time she had claimed she was being dragged into a car.

In Liverpool Local Court yesterday, Ms Chehadeh, who was supported by her husband, pleaded not guilty to the charge.

Lawyer Bryan Wrench told the court police now accused her of lying about her statement: “And we want to know why they have changed from praising her to now condemning her.”

Outside court, Mr Wrench shielded his client from the media’s cameras and questions about why police were now alleging she was lying.

“She’s under a lot of stress,” Mr Wrench said.

The case was adjourned to the same court on April 9.