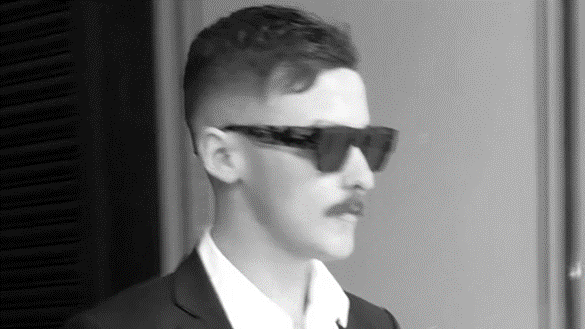 A young P-plater who drank more than a dozen beers and had two bumps of coke before he crashed into another car has been sentenced to a community corrections order and handed a hefty fine by a Sydney magistrate.

Dylan Matusewicz, 23, of Gladesville, but who also resides on the north coast, had the dangerous mix of drink and drugs before he crashed into another car in Darlinghurst as police watched on, a court has heard.

Matusewicz was sentenced on Tuesday at Downing Centre Local Court for driving with a suspended licence, and driving with a high-range PCA and drugs in his system.

For the first charge, Matusewicz was ordered to pay a $600 fine, had his licence suspended for six months and instructed to fit a mandatory interlock device in his car for 24 months.

Matuzewicz, who was represented by high-profile lawyer Bryan Wrench, previously pleaded guilty at the same court, which also heard how the 23-year-old P-plater was spotted by police officers in his Toyota HiLux around 2.30am on March 20 when he hit another car as it dropped off passengers on Bayswater Rd in Potts Point.

When police pulled him over a short distance away on College St, they suspected Matusewicz was under the influence of intoxicating substances due to his driving.

“The accused was searched and two empty clear resealable plastic bags were located in the accused’s back right pocket of his pants,” police state in the agreed facts.

“When asked what the bags were used for, the accused stated he ‘had cocaine’ in them previously.”

When police checked his green P2 provisional licence, Matusewicz voluntarily told them he was suspended.

A subsequent breath analysis returned a blood-alcohol level of 0.164, while an oral fluid test showed Matusewicz had both cocaine and methylamphetamine in his saliva.

“In relation to his consumption of alcohol, the accused informed police he had consumed 15 375ml bottles of Great Northern full strength,” police state.

“The accused also informed police he had consumed ‘a couple bumps’ of cocaine prior to driving.”

Police stated foot traffic was high around the main street of Kings Cross and the “potential danger” to pedestrians was “extremely high due to Matusewicz’s intoxication”.

In conjunction with the two offences on March 20, Matusewicz was also sentenced for a drive with a suspended licence offence in Strathfield on March 17, where he was handed a 12-month custodial release order by Magistrate Viney.

Matusewicz works as a demolition contractor.