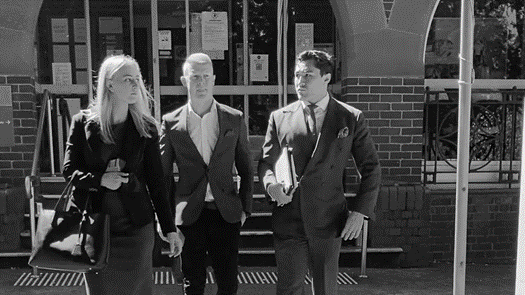 A father-of-two has escaped jail after he crashed into a power pole on the way to work on a Monday morning, blowing more than five times the legal limit.

Court documents reveal the Picton resident told police he was driving to work at 10.45am on Monday July 5 with two young passengers in the car. He was travelling on Mengangle Rd in a white ute when he crashed into a car that had slowed down to turn right and then abruptly stopped, according to the police facts.

As a result of the impact, the facts show Dunlop’s car veered to the left and collided with a power pole. While he was unhurt, the facts state the two occupants of the other car were injured and required medical assistance.

Dunlop’s two passengers and one of the occupants of the other car were taken to Campbelltown Hospital for treatment of minor injuries after the collision.

According to the facts, police arrived on scene and conducted a roadside breath test on Dunlop. He returned a positive result and a secondary test at the station revealed a blood alcohol result of 0.266 – more than five times the legal limit.

Despite the staggering reading, Dunlop told police he’d only had three glasses of red wine the night before but admitted he had finished drinking at 4am.

“He’s done well. He’s been to rehabilitation. He’s taken steps before this,” Mr Wrench said of his client.

Magistrate Mark Douglass said Dunlop had evidently acknowledged the “devastating impact alcohol has had on his life” through his engagement with rehabilitation.

“Sometimes the toughest sentence is making people face their needs in terms of rehabilitation but you’ve already started down that road.”

He said it would be “detrimental” to sentence Dunlop to full time custody and interrupt his commitment to rehabilitation.

However, the magistrate noted the “extremely high” reading and the resulting collision into the power pole. The court also heard Dunlop had a prior criminal history which contained a similar offence.

Magistrate Douglass sentenced Dunlop to a nine-month intensive corrections order to be served in the community.

“Focus on your rehabilitation. You have to appreciate this is a jail term,” he told the father.

Dunlop will also be disqualified from driving for six months and subject to a two-year interlock order once he’s able to drive again.