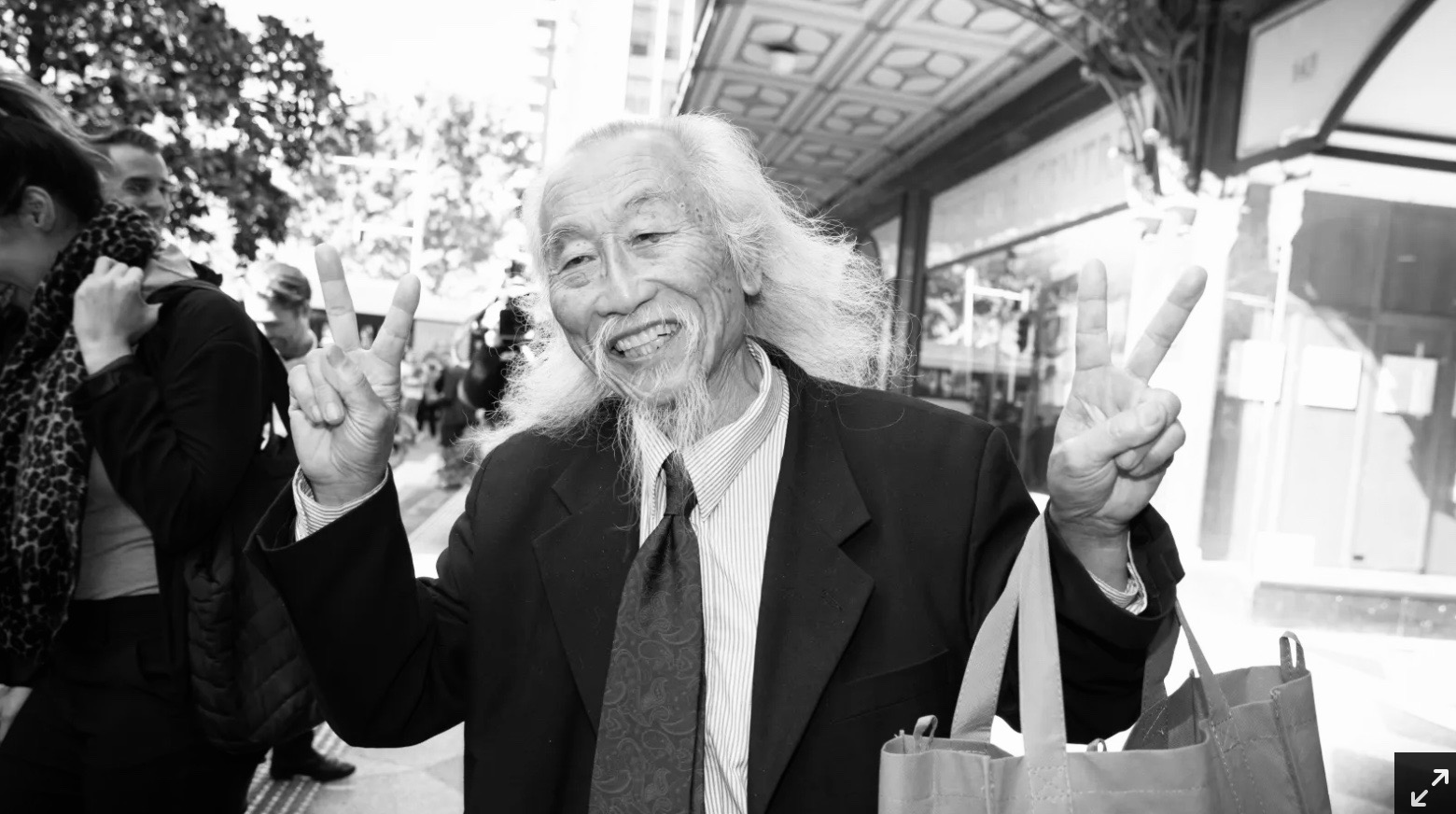 Appearing without his usual placard, sandwich board activist Danny Lim raised his fingers in a ‘V’ sign to two police in the Downing Centre on Wednesday morning, to which one of the officers replied “peace”.

Minutes later inside one of the courtrooms a vastly different scene was on display as footage of the diminutive, elderly man’s arrest showed him yelling for help while police took his one of his signature billboards and handcuffed him in a CBD shopping area.

“Please help, please. You cannot take my sign,” Mr Lim, 74, is heard yelling on body-worn camera footage as he is taken towards a police vehicle in Barangaroo on the morning of January 11 this year.

“We were all just in shock, didn’t know what to do, we didn’t know how to intercept,” Ms Hough told magistrate Jacqueline Milledge on Wednesday.

The court heard Mr Lim and his cheeky, politically charged sandwich boards were also well-known to Sydney police, except for those who arrested him in dramatic scenes witnessed by many after a woman on her way to work had complained that the sign he was wearing was offensive.

The words printed on the front of the sandwich board that landed him a $500 fine were “SMILE CVN’T! WHY CVN’T?”, which the woman and the officers attending took to mean he was using the word c—.

“As a woman I found the word highly offensive,” the woman reported to police after seeing Mr Lim standing outside David Jones in the shopping precinct just before 8.30am.

The arresting officer, Leading Senior Constable Tufan Salman agreed. “I can’t even say the word,” he told the court on Wednesday during Mr Lim’s appeal against his fine for offensive behaviour.

“Could that sign also be interpreted as ‘f—‘?” Mr Wrench asked.

“It could be like a foreign word,” Senior Constable Salman replied.

In the body-worn camera footage another officer at the scene that morning, Constable Ashleigh Hodge, can be heard telling Mr Lim “I honestly don’t give a shit” about the sign before later telling the court under cross-examination she did find it offensive.

To the third officer present, Senior Constable Anthony Hands, the offensive meaning of the sign was “very clear”.

“The sign was saying it all,” he told the court.

Mr Wrench said the sign could be read another way: “Why can’t you smile?”

Senior Constable Hand’s body-worn camera records him telling Mr Lim he’s “full of shit” after he yelps in pain upon being picked up by the officers.

Asked by Mr Wrench whether he was being offensive towards Mr Lim, Senior Constable Hands replied, “No. I doubt shit could be classed as an offensive word.”

He also denied it was offensive to say of the bystanders objecting to the treatment of Mr Lim, “Oh these f—ing people are so f—ing pathetic. Yes, I’m saying it on camera.”

People can be seen and heard in the footage arguing Mr Lim’s sign isn’t offensive.

“People laugh at that every day,” one bystander says.

It’s not the first time Mr Lim’s signs have drawn the ire of the law. A District Court judge quashed a conviction of offensive behaviour in 2017 over a similar incident in which Mr Lim stood on the side of a busy road in August 2015 with a sign that appeared to call then-prime minister Tony Abbott a “c—“.

The front of the sign read: “PEACE SMILE PEOPLE CAN CHANGE TONY YOU CVN’T. LIAR, HEARTLESS, CRUEL. PEACE BE WITH YOU.”

Judge Timothy Scotting said that, by depicting the word like “can’t”, Mr Lim was making a play on words and did not “unequivocally” use the swear word.

Ms Hough described the sandwich board as a “play on words” to be viewed in light of Mr Lim’s sunny demeanour. “It’s contextual isn’t it?”

“It’s a sign with smiley faces, it’s kind of nonsensical, it’s supposed to elicit a smile, a second glance,” she said.

The hearing returns to court on August 30.