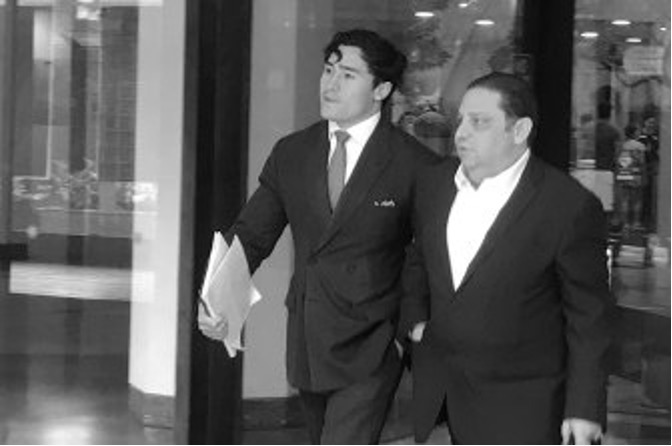 Two men who were convicted of attempting to influence a police officer over an investigation into a $50,000 gold bar have had their guilty verdicts overturned, after the Court of Criminal Appeal raised doubts about the evidence of a key witness.

Ian Lazar and Achilles Constantinidis were found guilty in 2020 of doing an act with the intent to pervert the course of justice after they were said to have procured a standover man, Witness B, to improperly influence a detective in Leichhardt.

The detective began investigating the provenance of a one-kilogram gold bar, which belonged to Mr Lazar, in August 2012 after it was discovered during a vehicle stop in Sydney’s inner west when a black BMW swerved to avoid a speed bump.

As time went on, Mr Lazar became increasingly stressed about the situation, with the detective contacting him multiple times to ask him to make a statement.

On Friday, the Court of Criminal Appeal cast doubt on this evidence and quashed the previous convictions, finding each man not guilty, after determining that the guilty verdicts were unreasonable and not supported by the evidence.

In a judgment, Justices Fabian Gleeson, Des Fagan and Julia Lonergan said Witness B had a lengthy criminal history including for offences of dishonesty, and his evidence was filled with “inherent conflicts and improbabilities”.

“There was some basis in the evidence for viewing him as a fantasist,” the judges said.

Witness B claimed during the trial that he met with Mr Constantinidis once and Mr Lazar twice, with each asking him to deter the detective from pursuing the investigation. He said he did not ultimately do this and never intended to.

In one phone call, which was intercepted by police, Witness B phoned Mr Lazar on August 22 and put on a fake accent while purporting to be “Detective Sergeant Superintendent McGillicuddy”, an apparently senior officer who was working to protect Mr Lazar’s interests.

“I want you to relax, okay?” the fictitious McGillicuddy said. “I promise you this much … he can’t charge you for any reason.”

The gold bar investigation was ultimately dropped on August 23, 2012, after the investigating detective had a conversation with another officer in the fraud squad. The cessation of the case had nothing to do with Witness B.

The judges said the effect of the “play-acting” in the McGillicuddy call was to delude Mr Lazar into believing actions had been taken to call off the investigation, “to calm Lazar down”.

One reasonable possibility was that Mr Constantinidis did nothing more than ask Witness B to mislead the nervous Mr Lazar, admittedly in a bizarre fashion, to reassure him and ensure their shared business dealings continued smoothly.

“The two of them evidently had substantial business dealings together and it would reasonably have appeared to Constantinidis that Lazar was verging upon a mental collapse that would render him unable to complete pending transactions,” the judges said.

“Lazar expressly claimed that he was reaching such a crisis, which he attributed to the stress of [the detective’s] inquiries.”

It was also possible that Mr Constantinidis was aware of a separate investigation that might be disrupted if Mr Lazar provided a statement about the gold bar, the judges said.

The court found Mr Lazar and Mr Constantinidis had no relevant prior convictions, and it might be thought improbable that they would respond to a routine police investigation by “requesting a man with an extensive criminal record, including for offences of violence … to break the legs and arm of the investigating officer”.

Mr Lazar told the Herald he welcomed the outcome, describing the judgment as “a full vindication”.

“I am just glad the matter is finally resolved,” Mr Lazar said.

His lawyer, Bryan Wrench, said the case should never have been proceeded upon because it was “a dead-end prosecution” that was “doomed to fail”.

“It’s regrettable that the Court of Criminal Appeal had to give a decision confirming that,” Mr Wrench said.