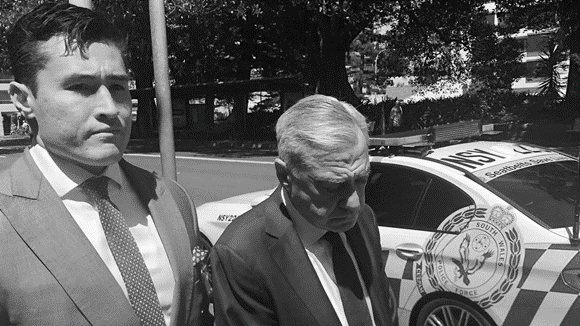 Veteran newsreader, journalist and broadcaster John Mangos has been convicted of drink-driving.

The popular former TV and radio star was two times over the limit when he was pulled over by the Highway Patrol at 1.30pm on a Thursday near his northern beaches home.

Manly Local Court was told on Thursday that he blew 0.127 after being stopped for a random breath test on Wakehurst Parkway on June 23.

Mangos, 66, who told police that he was on his way home from lunch at the Chilli China restaurant at Chatswood, was charged with mid-range drink-driving. He said he had two “mini” bottles of Rose.

It’s his fourth drink driving charge in the last 14 years. In 2009 and 2013 he was convicted of low-range drink-driving offences. Then in 2018 he was again charged with low-range PCA — the offence was proved, but dismissed, and he was put on a good behaviour bond.

His solicitor Bryan Wrench told Manly court that while Mangos had an “extraordinary” career in the media, he had suffered with depression and anxiety “behind the scenes for quite a period of time”.

Mr Wrench said the death of the star’s mother, prior to the latest drink drive incident, had “sent him into a bit of a spiral”.

The court was told that on the day of his arrest Mangos had been drinking by himself after visiting his deceased mother’s home.

“We don’t use this as an excuse, but as an explanation,“ Mr Wrench said.

The solicitor also said Mangos was admitted to three weeks’ treatment in a “psychiatric ward” after the offence.

Mr Wrench pointed out that Mangos carried out an “unbelievable” amount of volunteer work for charity with a list of organisations he helped “as long as your arm”.

A number of references for Mangos were tendered including one from John Brogden, the chair of Lifeline Australia.

Ms Denes also noted that with Mangos having a high profile and “extraordinary” career that “when the fall happens, unfortunately it happens in public”.

Mangos was a founding news anchor with Sky News when it launched in 1996 and spent 15 years with the cable channel presenting the prime time evening bulletins.

He spent 14 years with Nine News where he worked in the Federal Parliamentary press gallery and as the NSW state political correspondent before he became the network’s United States correspondent based in Los Angeles.

He then went to the Ten network to present Eyewitness News for a year before moving back to Nine to be an international roving reporter for the Midday Show.

Mangos later signed up as a breakfast announcer on radio station 2KY.

He now has his own communications and public relations firm offering media training, strategic communications advice and government relations. He also hires himself out for master of ceremonies and guest speaker work.

Mangos was fined $850 and disqualified from driving for four months.