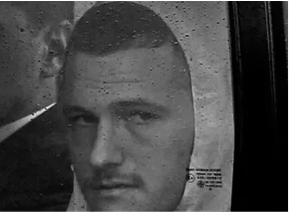 A scaffolder embroiled in a Romeo and Juliet-style romance that culminated in the shooting of him and his father will be behind bars until at least next year.

Joshua Smart, 24, and his 49-year-old father Michael Smart were shot outside their Pyrmont home in inner-Sydney last April.

The shooting, which left Michael Smart with a bullet lodged in his brain and requiring full-time care, followed a long-running dispute with Joshua Smart’s girlfriend’s family.

Smart was charged after he refused to tell police who the shooter was.

Smart was sentenced in Central Local Court today for concealing an indictable offence and using a phone to send text messages with death threats to his then-girlfriend Monique Farrell. The court heard the texts included “I’m going to kill you slut” and “I am going to get your brother and dad”.

“Let me make it clear to you sir, threats to kill can never, never be excused,” she told him.

Photographs of a revolver and bullets were also found on his phone.

Ms Greenwood sentenced Smart to a maximum of three years jail, but he will be eligible for parole in July 2016.

On why his client didn’t tell police the identity of the shooter, Mr Wrench said Smart was fearful.

“If they are willing to go up to someone in broad daylight, who knows what they are capable of,” he told the court.