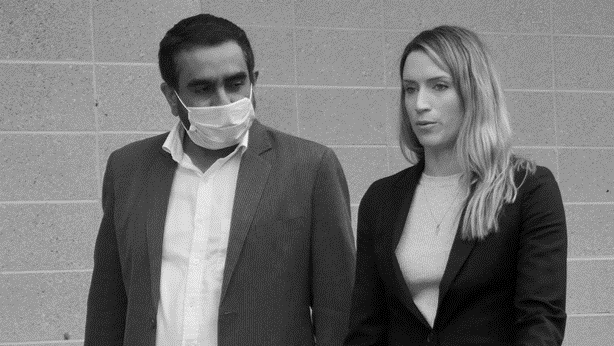 The lead investigator in the case of an alleged conspiracy to defraud the Commonwealth admitted he could not be satisfied some evidence that may have helped one of the accused was disclosed to defence lawyers, a court has heard.

The accused, 49 and 38, respectively, have pleaded not guilty to conspiring with each other and a third man, Gopalakrishnan Suryanarayanan Vilayur, with the intention to dishonestly obtain a gain from the department between March 2019 and June 2020.

They are accused of corrupting the department’s IT procurement processes relating to contractual projects to favour candidates at Kahlon’s and Vilayur’s businesses before sharing in the profit margins received.

The trial on Tuesday heard that police made nearly 24,000 communication interceptions – including text, audio and SMS – for Kahlon and about 60,300 for El-Debel but only 175 of those items formed part of the brief of evidence for the prosecution.

Catherine Newman, the barrister representing El-Debel, said police had a duty of disclosure in criminal matters and one of those aspects involved providing the defence with any evidence that may help them.

She asked Mr Gibson if it were “fair to say you can’t be satisfied that any calls or interceptions that may assist Mr El-Debel in his defence were disclosed”.

Ms Newman also questioned Mr Gibson about other evidence-gathering processes, including not investigating a contact known to the men and including seemingly unrelated text messages between El-Debel and his cousin as evidence.

Ms Newman said a phone call between Kahlon and El-Debel about the latter driving to Sydney to “pick up the stuff” related to a business idea as claimed by Kahlon in his police interview.

In that call, El-Debel said “mate, I have been racking my brain about this … I’m telling you, we’re going to be rich”.

“We need to sit down and we’ve got to plan this out properly,” he said.

“We need to do it quick before someone else gets it.”

After being arrested, Kahlon told officers that the phone call was about “an idea and then how we will execute and make a product”.

Ms Newman said a call between Kahlon and another man was about building an app together.

Matthew Kalyk, representing Kahlon, put to Mr Gibson that it was fair to say the brief of evidence did not contain any of Kahlon’s call charge records.

Mr Kalyk said police also executed a search warrant relating to Kahlon’s accountant, but the prosecution did not call evidence from the accountant.

In relation to Kahlon’s international money transfers to Hong Kong companies, which the prosecution alleges was a “pool of money” to pay El-Debel and Vilayur as part of their conspiracy, Mr Kalyk said his client could provide invoices that confirm those transfers were for business services.

The defence lawyer said some of the calls between Kahlon and other people overseas related to constructing a building to rent, investments and software development.

The court heard that the two accused do not have criminal records.

Following the presentation of the case against the men, Commonwealth prosecutor David Staehli SC in his closing address told the jury to find “both men guilty because the Crown has established the elements of the charge beyond reasonable doubt”.

Mr Staehli said the conspiracy, or agreement, did not have to be in writing and the circumstantial evidence proved that the accused intended to commit the dishonesty.

His closing address is expected to continue on Wednesday before defence lawyers make their addresses. The trial presided over by Justice Michael Elkaim began in early June.