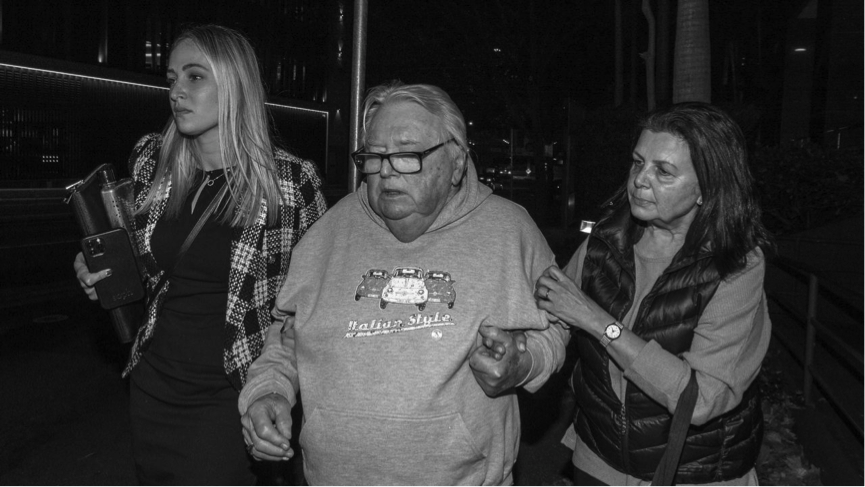 Famed swim coach Dick Caine, charged with abusing two teenage former students in the 1970s, has been bailed after his wife revealed he is dying of cancer and has only months to live.

Investigators say the alleged victims were “courageous” in speaking out as endorsements from prominent Australian athletes and politicians are unearthed from the coach’s past.

Caine, 76, was arrested on Wednesday morning at his Condell Park home after police began investigating allegations made by one girl in January 2021, Superintendant Chris Nicholson told media.

Police will allege the girl was a swim school student in the mid-1970s and formed Strikeforce Coco to investigate the claims.

A second alleged victim came forward, another former student, to make claims she was abused at about the same time, police allege.

Caine appeared in Bankstown Local Court via videolink on Wednesday afternoon charged with nine historic charges; six counts of carnal knowledge as a teacher of a girl aged 10-17 and three counts of indecent assault.

The coach appeared on the screen from a grey room at Bankstown Police Station, wearing a grey hoodie and wide glasses, as solicitor Bryan Wrench applied for his release on bail.

His wife, Jennifer, stepped into the witness box to explain Caine has lung and throat cancer and is in palliative care as an outpatient.

Caine has “maybe six months”, his wife told the court.

Mr Wrench said Caine’s good standing in the community and poor health gave them real fears he may die in prison if not bailed.

The Caines have been inundated with support from former students since news of his arrest broke, Mrs Caine told the court.

The court heard Caine had not left the country in more than a decade because of his health and he would follow all bail conditions imposed.

He invited the police into his home for an interview in 2021 and did not flee the country, the court heard, and the police returned to charge him on Wednesday morning.

The police prosecutor told the court there were “concerning” allegations against Caine and he could be put behind bars if found guilty.

The magistrate noted the delay in the NSW District Court, where such a trial would likely be held, was longer than Caine’s expected life.

He was released on bail with conditions including a $10,000 surety and reporting to police.

Mr Wrench, outside court, said he would ask police to discontinue the case against Caine.

“Today NSW Police charged an innocent man, a terminally ill man, for an offence that occured 46 years ago,” the solicitor said.

“He is going to fight to his dying last breath to clear his name, it’s a terrible situation.”

“I would like to acknowledge the courage and bravery of the victims who have come forward in relation to this matter,” Supt Nicholson said earlier on Wednesday.

“It is never easy for a victim of sexual violence ot come forward and tell their story to police.”

“Standing here today I would like to say, to all victims of sexual abuse living in our community, that the NSW Police Force wants to listen to your story.”

Police will claim the abuse took place over almost two years in the 1970s and “at various locations” around southern Sydney.

Supt Nicholson said he could not comment on whether police believed there were other alleged victims – but pledged investigators wanted to hear from everyone who claimed to have been abused whether recently or 50 years ago.

“We will investigate all matters that come to our attention with our full potential and we will wrap our full support around victim survivors as they tell their story,” he said.

Police claim the alleged victims were aged 15 and 16-years-old at the time of the abuse.

Caine’s website features dozens of photos of the coach with students but also with famous boxers, swimmers and supporters in the decades before the allegations against him were known by police – and now the public.

An undated letter from then-NSW Premier Gladys Berejiklian congratulates Caine on 45 years of “hard work, persistence and dedicated service” to the community.

Ms Berejiklian, in the letter, notes Caine trained 11 Olympic and World champions and his impact on multiple generations of children as they learned to swim.

Former shock jock Alan Jones, in a 2015 letter, agrees with Caine’s assessment of political polls, the “treachery” against Tony Abbott and the coach’s hatred of Malcolm Turnbull.

A biographical piece on the coach’s website says the medal is proudly displayed in the pool.

Cane told the profile writer that he was waiting until he turned 80 to have a restful retirement.

His case will return at a later date.