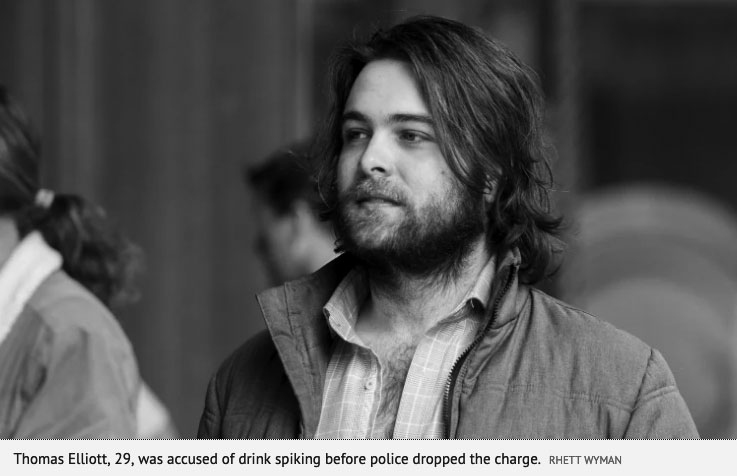 A NSW Police officer who charged a man with spiking his friend’s drink thought a toxicology report recorded the powerful drug GHB in her system when it was actually the name of a normal bodily enzyme.

The Downing Centre Local Court heard on Tuesday that it wasn’t until plain clothes Senior Constable Mostafa Elassaad searched “Gamma GT” on Google some time after arresting Newtown man Thomas Elliott that he realised what the substance was.

Mr Elliott, 29, is now fighting for police to pay his legal costs after they withdrew a charge of administering a poison with the intention of injuring or causing distress in January.

His lawyer Bryan Wrench, who said police unreasonably brought the charge against Mr Elliott and failed to reasonably investigate him, put to Senior Constable Elassaad that no medical records showed the woman had GHB in her system, and that the officer sought no medical advice, to which he agreed.

“Do you know what Gamma GT is?” Mr Wrench asked.

“I do now,” Senior Constable Elassaad answered, confirming he had seen the answer on Google.

“Did you discover that it’s a natural enzyme in people’s livers?” Mr Wrench asked, to which the officer replied, “yes.”

The woman, who was part of Mr Elliott’s friendship group at the Town Hall Hotel in Newtown on November 22, was hospitalised after being found unconscious in the bathrooms of the venue before going to police over the incident days later.

But in Facebook messages read to the court, which the woman wrote to a friend before being discharged from hospital, she said she didn’t think she had her drink spiked and doctors believed her condition was due to alcohol consumption and medical reasons.

“Waiting on the discharge papers from the hospital but they reckon it’s medical related, not drink spiking,” one message said.

Those messages had been in possession of police before Mr Elliott made a bail application to the Central Local Court last year.

Senior Constable Elassaad said he had relied on the statement of the woman, who didn’t single out Mr Elliott, nor had any of the pair’s friends who were at the pub that night.

He said he also relied on CCTV footage of the incident, which he said in a tendered statement of police facts “revealed a clear and unobstructed view of the incident occurring.”

But under cross-examination the officer said “it’s not the clearest footage I’ve seen”, with the video played in court showing Mr Elliott’s body partly obscured his actions.

The grainy black-and-white footage showed Mr Elliott sipping his drink before leaning back and putting his right hand on his hip, then sitting back up and lifting the coaster off a glass in front of him.

The woman, who had put a coaster on the top of her glass, wasn’t at the table when Mr Elliott had arrived, nor when he’d gone through the motion.

“At the time, based on the footage, I believed he placed it in there by spitting it in there,” Senior Constable Elassaad said. “I can’t see directly how it got in his mouth.”

But Mr Wrench said there was “no gap in the play” to suggest Mr Elliott had put the GHB in his mouth to put in the woman’s drink.

The cost hearing will continue at a later date.