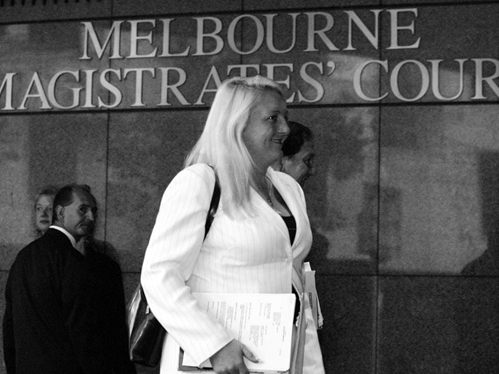 Victoria Police told barrister Nicola Gobbo they would pay for her to flee overseas, including to a country without extradition treaties with Australia, so she could avoid criminal investigation or prosecution into her work as a police informer.

The offer was made in 2020 by a senior officer in the police’s covert operations unit while the Royal Commission into the Management of Police Informants was investigating the potentially corrupt actions of the former lawyer and Victoria Police.

A source familiar with the plan, who cannot be identified because they were talking about confidential operations, said Ms Gobbo was told police would arrange and fund her permanent relocation to one of several overseas destinations that placed her out of the reach of authorities.

The officer said accepting the deal would mean Ms Gobbo was safely beyond the jurisdiction of Victorian prosecutors or the courts before the start of any formal criminal investigation or any charges could be laid in what has become the worst legal and police scandal in the state’s history.

Any criminal prosecution of Ms Gobbo would likely reveal evidence that Victoria Police would find embarrassing, or expose police members themselves to prosecution.

The Age cannot disclose any further details due to laws that grant the Chief Commissioner of Police widespread powers to suppress information and circumvent normal legal constraints.

It appears Ms Gobbo rejected the offer. The 49-year-old has hired barristers Rishi Nathwani and Phillip Boulton and solicitor Bryan Wrench to represent her in dealings with a special investigator appointed to examine the case, former High Court justice Geoffrey Nettle.

Documents released during the 2018 High Court case that ultimately led to Ms Gobbo’s public exposure showed Victoria Police had previously threatened to have her children taken away unless she complied with security arrangements set by the force.

“Victoria Police remains focused on implementing all the recommendations from the royal commission. We are also cooperating fully with the Office of the Special Investigator and other relevant agencies.”

The foreign flight proposal was made by officers in Victoria Police’s Intelligence and Covert Support Command, which is the same division that was under intense scrutiny by the royal commission over its decision to recruit and use the barrister to inform on hundreds of her clients.

Within months, the royal commission recommended the creation of a Special Investigator to determine whether Ms Gobbo or any police officer had committed a crime. The ultimate decision to charge any person with a crime lies with the Office of Public Prosecutions.

Ms Gobbo and a number of law enforcement officials are believed to be under investigation by Justice Nettle’s team following hundreds of adverse findings by the royal commission.

Ms Gobbo and Victoria Police are also locked in a dispute over the compensation she believes she is owed after the force failed to keep her identity a secret and the scope of their ongoing duty of care.

Police had already settled a lawsuit for $2.88 million in 2010 after a senior government lawyer warned that she was “likely to succeed in her claim for compensation”.

Ms Gobbo has been in hiding since December 2018 when the High Court forced Victoria Police to publicly disclose her work as an informer after it ruled that concerns about her safety were outweighed by the potential damage that had been done to her former clients and the Australian justice system.

Convictions for two former clients have been overturned so far and appeals are under way in numerous other cases.