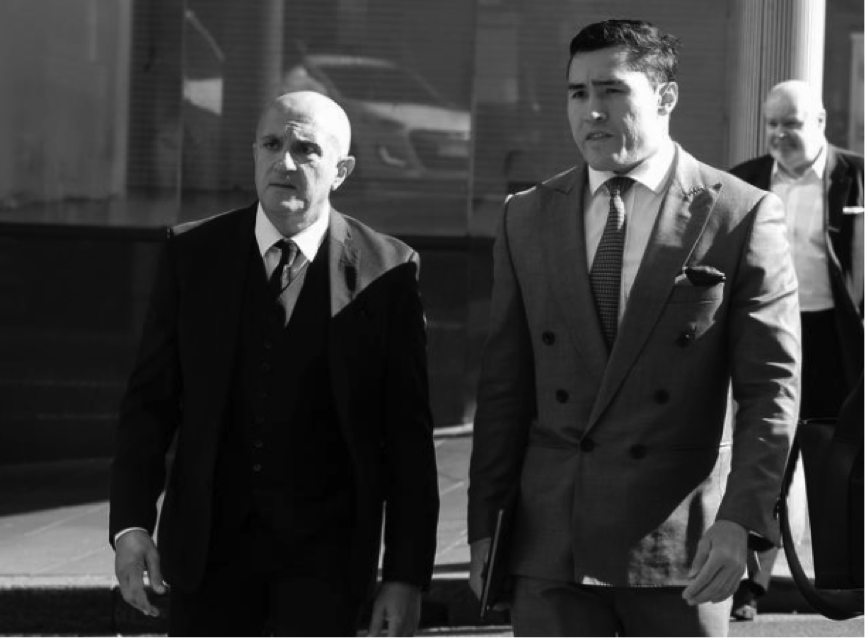 A Sydney landlord and his restaurateur mate who detained two men in a Hollywood-style shakedown over thousands of dollars in unpaid rent have been spared jail after claiming they were the victims of two French fraudsters.

The bizarre narrative played out inside the Downing Centre Local Court as Mario Venneri and Anthony Mowad, both 57, were on Friday sentenced for what was described by their lawyers as a “charade” and two legitimate businessmen playing “tough guys”.

They argued that while it appeared like an attempted standoff which teetered on the edge of violence, their clients were in fact trying to retrieve $6684 legally owed to Mr Venneri after they were deceived by the two men.

Mr Venneri’s lawyer Stephen Russell called for a NSW Police investigation into the men, saying they knew of at least 21 other cases in which they ripped off other landlords in a similar scheme.

The incident came about after one of the men, Brice Gouillou, rented out Venneri’s $950-a-week Surry Hills unit in February last year, but soon asked for a rent reduction due to his inability to pay due to COVID-19.

In May, unbeknown to his landlord, Mr Gouillou organised to sublet the unit via AirBNB to a woman.

And when Venneri found out, he evicted the tenants and changed the locks.

Because Mr Gouillou had been subletting the room for more than his rental payments, Venneri demanded over $6000 in rental arrears.

Instead of taking Venneri’s case to the authorities, he and Mowad took the law into their own hands.

They were charged by police after an incident on June 17 during which Venneri told Mr Gouillou and his friend Paul Remilly they were not allowed to leave the Clifton Reserve apartment under the threat of violence.

Venneri invited the pair in before demanding the money and placing cable ties and a chained bike lock on a table in an effort to intimidate the pair.

The court heard the two men were held between 3.30pm and 4pm, during which time Venneri threatened: “You have two ways to go, the good way or the wrong way”.

During a physical scuffle, Mr Gouillou was pushed back onto a chair and his friend had his jacket ripped.

In a further attempt to frighten them into paying, Mowad suggested that Venneri “get your other friend to come here”.

Venneri picked up his phone and feigned a conversation with a standover man named “Johnny”.

Johnny did not exist and there was no phone call, however it coerced Mr Gouillou into transferring the money.

Crown prosecutor Eric Navea described it as a case of “vigilantism” which was “intolerable in the eyes of the community”.

However Venneri’s lawyers told the court he relied on rent from the unit and two other properties as his only income and he had been deeply affected by COVID.

“It was a couple of tough guys in charade,” Mr Russell said.

“He never made a phone call or anything, it was a clumsy attempt at acting like a couple of tough guys to get their money back.”

Mr Russell described the two Frenchmen as “blow-ins” and “fraudsters” who were ripping off honest Australian business owners and landlords.

Mowad’s lawyer Brian Wrench said while his client had been portrayed as something similar to fictional mob boss Tony Soprano, he was only there because his friend asked him to come as a witness as he attempted to retrieve what was legally owed to him.

He pointed to text in which Mowad insisted that Venneri only demand what he was owed.

“You can’t be much of a standover man if you can’t stand over them and are 5’4” and 57. You’re not going to inspire fear in the best of people,” Mr Wrench said.

The two mates later joked via text that the incident was their “Quentin Tarantino” moment.

Magistrate Michael Barko said while the money was legally owed to Venneri, the pair had acted criminally.

“It was all bluff, it was all somewhat like a movie scene,” Mr Barko said.

Venneri pleaded guilty to two counts of intimidation and two counts of assault. He was convicted and sentenced to an 18-month conditional release order.

Mowad, who pleaded guilty to two counts of intimidation, did not have a conviction recorded against him and was also sentenced to an 18-month good behaviour bond.

Outside court Venneri said of the Frenchmen: “Certainly other people have been ripped off” but otherwise refused to comment.