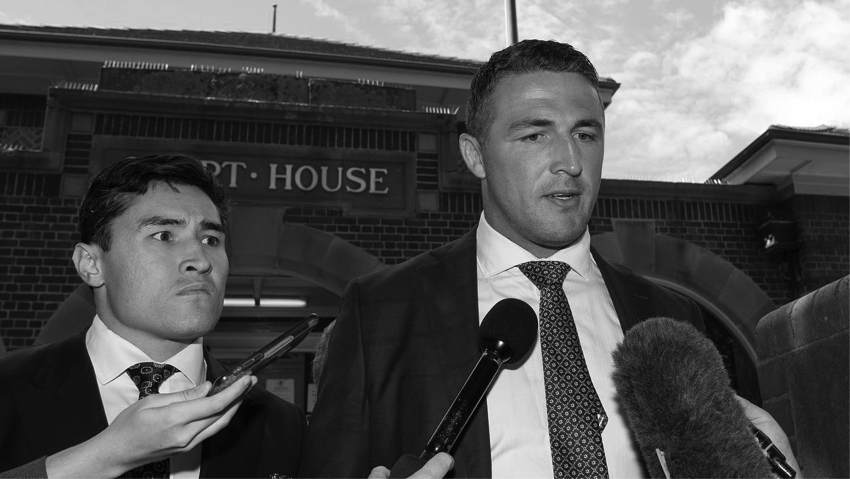 The lawyer for Sam Burgess says his client has “finally been vindicated” after the ex-NRL star was acquitted on appeal of intimidating his former father-in-law.

Mr Burgess was last month found guilty of intimidation following an argument with Mitchell Hooke, ex-wife Phoebe Burgess’ father, at his property near Bowral in October 2019.

“He is relieved,” Mr Burgess’ lawyer Bryan Wrench said outside of court.

“This is the judgment he deserves. He never wanted this fight, but he had to fight to clear his name. He is innocent and finally he has been vindicated.”

Both Mr Burgess and Mr Hooke appeared at Friday’s proceedings via audiovisual link.

Handing down his judgment on the appeal, Judge Mark Williams SC said the case was a matter of “he said, he said”, and was not satisfied Mr Hooke’s version of the altercation could be proven beyond reasonable doubt.

Mr Hooke claimed Mr Burgess walked over to him and pointed his finger “1.5 metres to two metres” away from his face, yelling: “I’m going to get you.”

Mr Burgess acknowledged a heated argument did take place but denied saying he was going to “get” Mr Hooke.

Judge Williams also said the accuracy of Mr Hooke’s version of events became questionable after both he and Ms Burgess “denied” speaking to anyone else prior to making statements to police.

Phone records read to the court showed the pair had both spoken to their personal lawyers, with Mr Hooke also speaking with PR expert Ben Mitchell for 38 minutes before going to Moss Vale Police Station.

“The most telling aspect … they denied having spoken to anyone else or seeking any advice before speaking to the police,” Judge Williams said.

“After Mr Burgess left the property Mr Hooke and Ms Burgess made numerous calls to lawyers over the course of the evening.”

Judge Williams said the argument did “not constitute intimidation” before quashing the conviction.

He also threw out an AVO taken out by Mr Hooke against Mr Burgess.

Judge Williams also questioned Mr Hooke and Ms Burgess’ motives for going to the police over the incident – and whether there was a “genuine desire” to bring the ex-footballer to justice.

Mr Burgess told the court on a previous occasion Mr Hooke had told him he was going “to ruin his career” during the argument.

A month prior to the hearing over the matter, serious allegations of drug use and domestic violence were levelled against Mr Burgess in The Australian. Ms Burgess has since admitted to providing a 50-page affidavit outlining the allegations to the newspaper.

“Surely … you say we are not participating in this because there’s a hearing next month, and we shouldn’t be hashing it out in the media,” Judge Williams said.

In February, magistrate Robert Rabbidge convicted Mr Burgess and handed him a two-year community correction order. He said Mr Burgess’ evidence was “changeable” and deemed the former Rabbitohs captain angry and aggressive during the altercation.

At the time, Mr Burgess told reporters he was “confused” and said he would appeal.