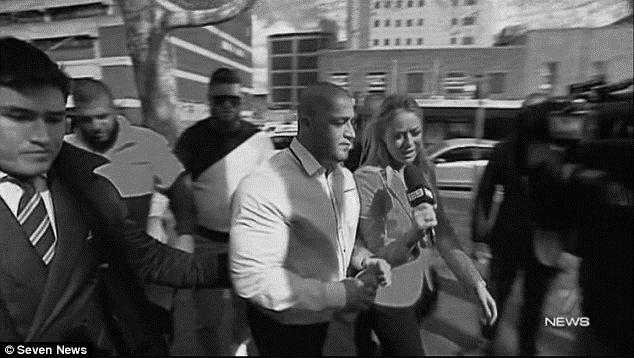 A Sydney man has allegedly made threats against two news reporters while at a courtroom, just moments before he was ordered to serve jail time on stalking and intimidation charges.

The accusations have been made against Auburn man Walid Elriche who is understood to be an associate and part-time bodyguard for controversial Auburn deputy mayor Salim Mehajer.

On Friday, Elriche was sentenced to at least nine months imprisonment after pleading guilty to charges of stalking and intimidation with intent to do harm.

The 33-year-old is now accused of telling a male reporter ‘I’m going to f***ing kill you’ and warning a female reporter ‘you find me, I can find you’ while inside Parramatta Local Court.

In July he was involved in another physical clash with reporters when he was filmed lashing out outside Fairfield Local Court.

On Friday, footage of the man entering court shows him aggressively barging into the female reporter, Channel Nine’s Airlie Walsh.

‘I’m not trying to threaten you, but you know my criminal history,’ Elriche later told Ms Walsh inside the courtroom according to Nine News.

“There’s a lot of reporters around that can get hurt.

‘I’m telling you this because you’re a woman. Don’t get involved in a man’s business.’

Channel 7 reporter Bryan Seymour alleges Elriche also approached him in the courthouse, allegedly make the threat, ‘Stay away from my brother. You found me. I can find you.’

NSW Police confirm they were called to Parramatta Local Court on Friday morning ‘after two reporters became concerned for their welfare’.

‘Police attended and spoke to both parties. Enquiries into the incident are continuing and there are still no reports of any injuries,’ a spokesperson confirmed.

Following the alleged altercations, the accused – known as ‘Wally’ – was ordered to serve time in prison after he and two other men kicked down a door and demanded the repayment of a $25,000 debt from a man in Castle Hill in March, the Sydney Morning Herald reported.

Elriche told police that he did not know the victim, who was at home with his wife and children, and that he only wanted to help his friend reclaim the outstanding debt.

His first heated altercation with reporters took place outside Fairfield Local Court, where he as accompanying his friend Aymen Terkmani.

Aymen was facing charges relating to the sexual assault and murder of 16-year-old Mahmoud Hrouk.

Police were forced to intervene when Elriche and his entourage swore at the media, damaged camera equipment and hurled one reporter’s microphone at a parked car.

Elriche later defended 22-year-old Terkmani on Facebook saying that everyone was ‘quick to jump the gun’ when it came to the horrific allegations.

Nine News alleges he was the man filmed throwing punches up at Sydney music festival Stereosonic in Sydney last year.

Elriche has been seen alongside Salim Mehajer after he was thrust into the limelight following his lavish wedding to partner Aysha.

Mr Mehajer was fined $220 by Sydney’s Auburn council after he caused significant traffic problems in the Lidcombe area when he blocked off Frances Street to accommodate the gaudy event.

The procession featured four helicopters, a squadron of luxury cars, a battalion of drummers, a red carpet and a cake nearly taller than the bride.