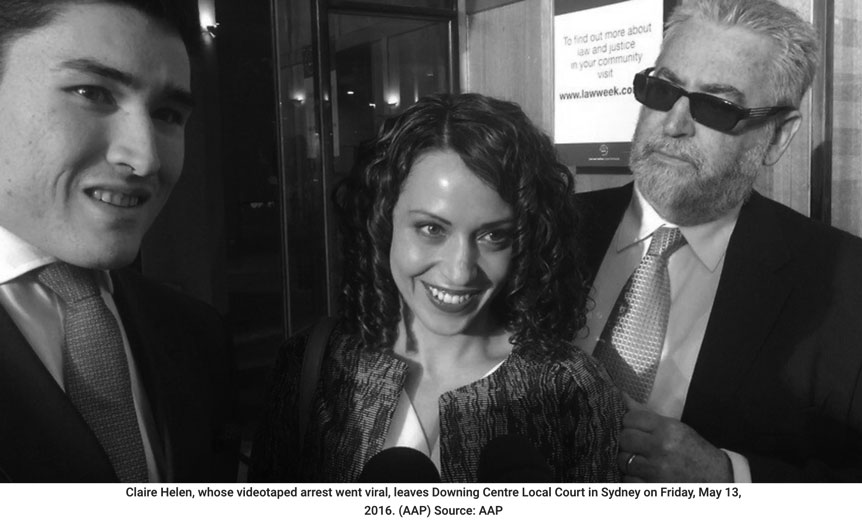 A Sydney woman has had charges of assault dismissed more than a year after a video of her arrest went viral.

A woman whose videotaped arrest went viral on social media has had charges of assaulting and resisting a NSW police officer dismissed.

The footage appears to show Claire Helen being hit with a baton and kicked in the head by officers during the incident at Kings Cross, in December 2014.

Police had alleged the woman struck a female officer during an attempt at restraint.

But Magistrate Graeme Curran found the woman’s original arrest was unlawful and dismissed her charges on the basis the alleged offences occurred as a result of that custody.

“It’s been a long time coming, so it’s a really nice relief,” she said outside court.

“I didn’t strike anybody.”

The magistrate found it “must” have been Ms Helen who struck the officer but said the prosecution had not been able to prove the police were in proper execution of their duties when the act occurred.

He read evidence from witnesses who described a “rigorous” struggle between Ms Helen and police.

The court heard officers had become involved after a taxi driver accused one of Ms Helen’s friends of assaulting a police officer and she was asked for ID on the basis she may be a suspect.

But her trial heard the taxi driver had made it clear his alleged attacker was a man.

“I don’t have to give you anything,” Ms Helen allegedly said to an officer.

He also dismissed one charge against the man accused of assaulting the taxi driver.

“The police were not entitled to do what they did.”

Ms Helen had also been facing a charge for failing to describe her identity, which was also dropped.