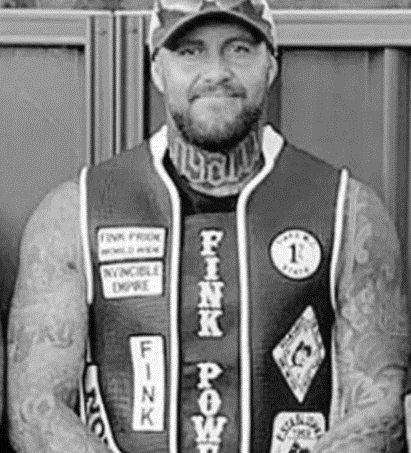 A high-ranking Finks bikie who repeatedly smashed a man’s head into a wooden bench during a vicious attack on two pub patrons has avoided jail time and won’t be barred from associating with the outlaw gang.

Tate Desmond Ward, 33, a current member and former president of the Finks’ notorious Hunter Valley chapter, made an eleventh hour guilty plea in Muswellbrook Local Court to one charge of affray.

Ward was one of three Finks bikies who attacked the men in a cocaine-fuelled outburst in the days before Christmas 2020.

The trio had been drinking for several hours at the Royal Federal Hotel Branxton on December 19 when they got into a heated argument with their victims.

In court documents police said the Finks waited until security was distracted by an unrelated scuffle before pursuing the men.

Police said Ward punched one victim before smashing his head into a wooden bench, while Benjamin Main and a third Fink who officers could not identify punched and kicked the other victim.

The melee was broken up by security but both the Finks and the victims fled the pub before police arrived.

Ward and Main, who were wearing Finks branded clothing at the time of the attack, were tracked down using CCTV.

Ward was last week sentenced to a 12-month community-based intensive correction order for his role in the assault, but the magistrate stopped short of ordering him not to consort with other bikies as part of its conditions.

His guilty plea was the conclusion to a drawn-out court case that saw him twice scheduled to defend himself at a hearing, before the proceedings were delayed due to Covid.

Main, 29, who also pleaded guilty to one charge of affray but was serving a community corrections order at the time of the assault, was last year sentenced to 16 months’ behind bars.

He was released one week later with his penalty reduced to a 12 month intensive correction order on appeal.

At the time Main’s lawyer Roland Day told Cessnock Local Court the Finks were on a cocaine and alcohol binge at the time of the attack, but his client was actively trying to distance himself from the gang.

“His choices are something he probably regrets,” Mr Day said.

“He probably thought he had a sense of loyalty.”