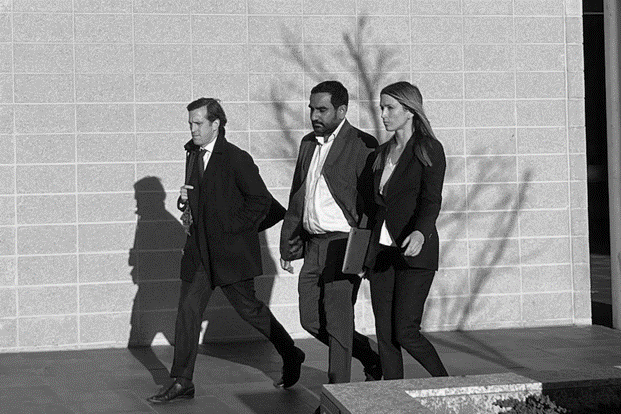 A public servant and a businessman found guilty of conspiring to manipulate IT recruitment in the federal Department of Finance, have avoided jail, after ruining their reputations, “probably through greed”.

Abdul ‘Alex’ El-Debel, 49, and Raminder Kahlon, 38, were accused of conspiring with a third man to dishonestly obtain a benefit from the Commonwealth, by putting forward candidates from companies with which they were associated.

In sentencing the men on Tuesday, Justice Michael Elkaim noted the crime was something of a “part-time conspiracy”, which lasted from March 2019 to June 2020.

He described how the conspiracy had operated, saying the three men would facilitate the procurement process to the advantage of the candidates put forward by certain companies, to gain the margins payable, which were then distributed to the men.

“I am … satisfied that the jury concluded beyond reasonable doubt that the agreement involved the intention to dishonestly obtain the margin,” Justice Elkaim said.

Two companies were involved in the case; New Horizons and ALGORAM.

It was the prosecution’s case that ALGORAM was a combination of the names of the men.

Justice Elkaim said today he rejected Kahlon’s assertions the ALGORAM company was not made up from the men’s names.

It was an odd and difficult case from the start.

The jury sat through a whole week of telephone intercepts conducted largely in Hindi and Punjabi, as they followed along with a translation.

But the main difficulty for the prosecution was that no monetary value has ever been put on the loss.

Prosecutors told the jury all that had to be proved beyond reasonable doubt was that the men intended to commit the crime, not that they actually did it.

Defence lawyers pointed to the highly politicised environment, suggesting the accusations may have been office politics.

El-Debel’s lawyer also pointed out he had declared a conflict of interest in recruitment for two key projects.

El-Debel also maintained he had only been trying to get the best staff for the department, and had actually saved the government money.

“He may be right, but he did it the wrong way,” Justice Elkaim said.

The jury found both guilty of the conspiracy charge.

On Tuesday, Justice Elkaim noted there was no remorse from the men.

He also said he rejected submissions from their lawyers that each was more culpable than the other, saying he would treat them equally.

“Ultimately, I am faced with sentencing two intelligent, high-achieving, respected family men who have, probably through greed, ruined their reputations and harmed their families’ lives,” he said.

“If the fraud had revealed a significant loss to the Commonwealth or a quantifiable large gain to the offenders, a sentence of full-time imprisonment would have been inevitable.”

Instead the men will serve intensive corrections orders for three and a half years, and will also have to complete 300 hours of community service.