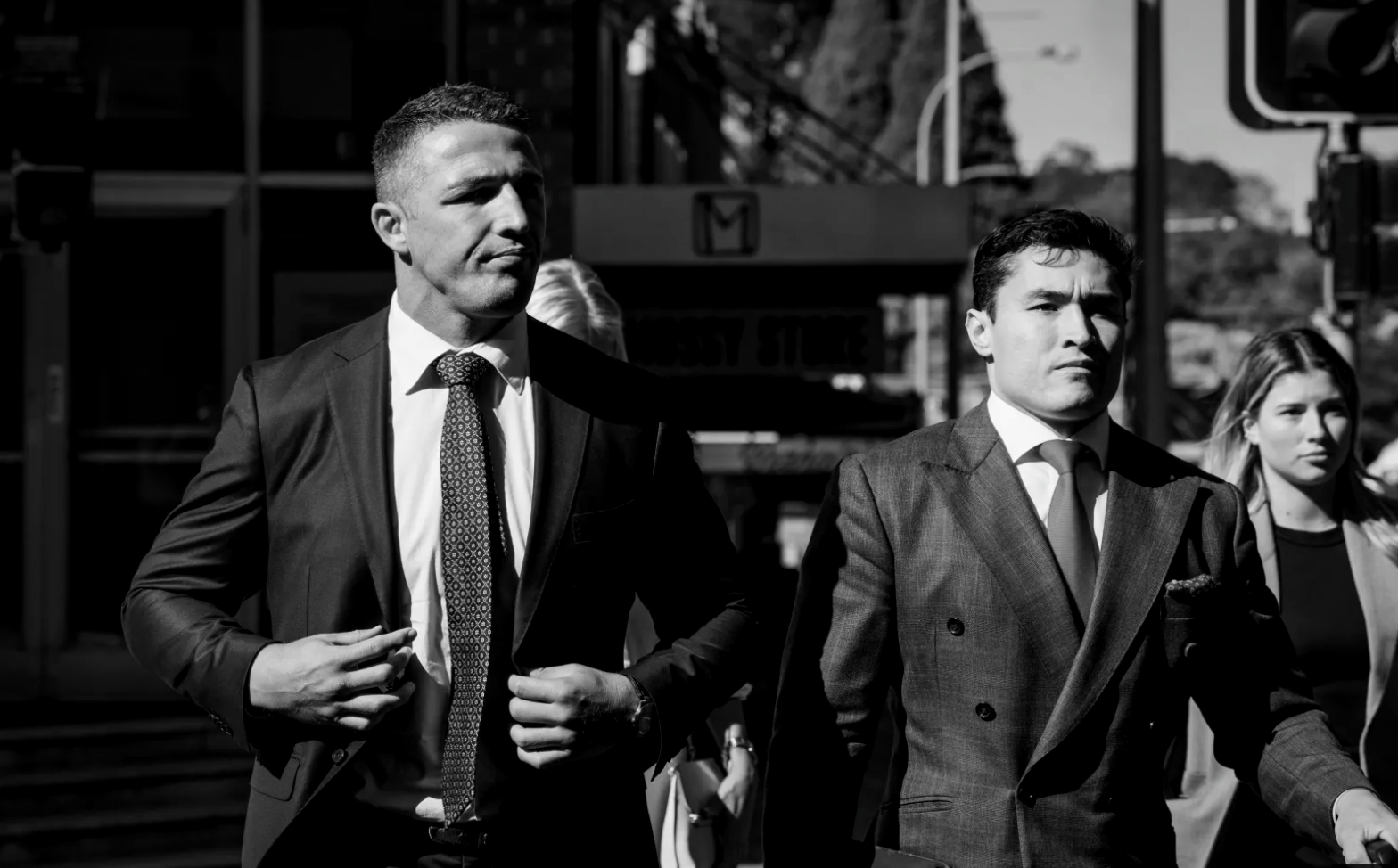 Sam Burgess’ lawyer believes the “deliberate” effort by the former league star’s ex-wife and her father to destroy his career will continue following court proceedings, a court has heard.

Defence lawyer Phillip Boulten, SC, made his closing submissions in Moss Vale Local Court on Friday, as Mr Burgess continues to fight one charge each of intimidation and assault.

The charges, to which Mr Burgess has pleaded not guilty, came after an alleged altercation between the former Rabbitohs captain and Phoebe Burgess’ father Mitchell Hooke on his Glenquarry property in the Southern Highlands in October 2019.

Mr Boulten told the court Ms Burgess and Mr Hooke had deliberately orchestrated an effort to “damage” his client’s reputation by taking serious allegations levelled against Mr Burgess public ahead of the hearing date.

In November, Ms Burgess admitted to the court she and her father had made the choice to hand a 50-page affidavit to The Australian detailing alleged drug use and domestic violence by Mr Burgess.

Mr Burgess was in the witness box on Friday morning and told the court how, during the incident, Mr Hooke told him: “I’m going to make sure I ruin your career if it’s the last thing I do.”

Mr Boulten said during his final submissions, “Mitch Hooke and Phoebe Burgess have tried to destroy my client’s career, this case is part of it, and it won’t stop here.

“It was done deliberately to cause damage to my client’s reputation. It is consistent with my client’s assertion that Mr Hooke said to him I’m going to get you and I’m going to make sure I destroy your career.”

During his time in the witness box, Mr Burgess admitted the pair did have a verbal altercation but said they were “five or six metres” apart from each other.

He labelled the incident a “little argument” but admitted he was upset and angry at the time.

The former Rabbitohs captain said he visited the property from 2pm to 4pm before Mr Hooke asked him to leave.

Mr Burgess said the argument kicked off as he began walking to his car, telling Mr Hooke: “Mitch, I think you are a bad person inside and out and that’s why Phoebe is the way she is.”

Mr Burgess said Mr Hooke then followed him out to the car to continue the argument.

“He said, ‘Sam, nobody loves you. Your own family doesn’t love you. We love you and you’re throwing it all away.’ ”

The argument ended when Ms Burgess’ sister Harriet Hooke intervened and “ushered” her father inside.

Mr Burgess told the court he texted Ms Burgess after the argument to let her know he had left the property before she replied, “Don’t you ever message me again.”

She then sent a follow-up text shortly after that said, “Harriet witnessed that. You are a pig. You are an absolute low life. How dare you. We are done. At least people have now seen who you really are, you f—.”

Mr Burgess admitted to having had four schooners of Great Northern beer before the visit but said he was sober when he arrived at the property.

Mr Boulten asked Mr Burgess: “Would you regard yourself affected by alcohol?”

Police prosecutor Jamie Palmer argued that Mr Burgess blamed Mr Hooke for having a part in his failed marriage, which caused him to lash out and tell his father-in-law he was going to “get him” and “come after him”.

Ms Palmer also argued Mr Burgess was standing over Mr Hooke, pointing at him while shouting obscenities during the incident.

Mr Burgess agreed Mr Hooke did say, “So you are going to hit a 64-year-old man?” during the argument but said he simply laughed in response.

In her closing submissions, Ms Palmer argued Mr Hooke was a man used to dealing with heated interactions during his time as a businessman, but was left “shaken” after his interaction with Mr Burgess.

“This is not a man who is a wilting flower,” she said. “And yet he was concerned if he took a step backwards he would be hit.”

A judgment will be handed down at Moss Vale Local Court on February 5.