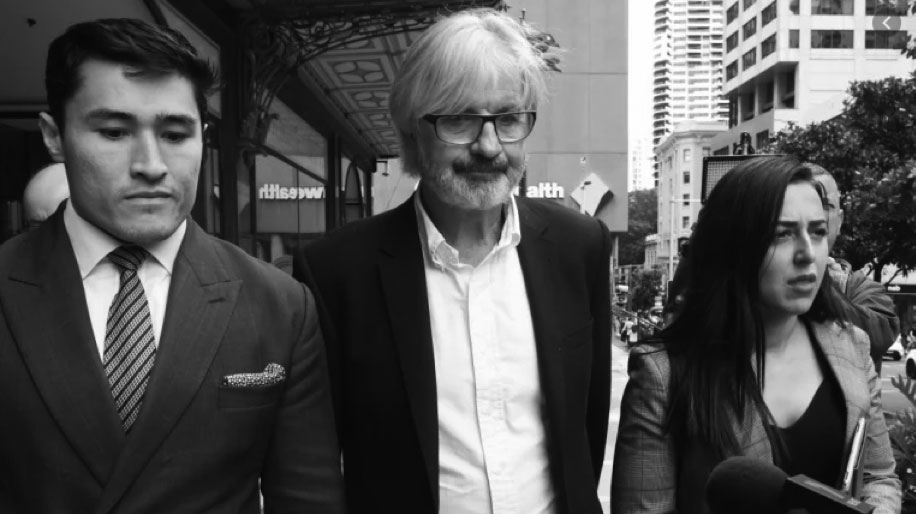 A jury has found Wolf Creek actor John Jarratt not guilty of raping a woman in Sydney more than 40 years ago.

The 66-year-old stood trial in the NSW District Court after insisting extramarital sex he had with a woman in a share house in 1976 was consensual.

The complainant was 19 years old at the time and said she did not go to police until late 2017 because she feared she would not be believed.

Mr Jarratt raised his hands in the air and family members began to cry in the public gallery as the verdict of not guilty was returned.

Outside court, Mr Jarratt said he was “over the moon” and thanked his legal team.

“It took 15 minutes for [the jury] to make up their mind. It was unanimous.

“No man should have to go through what I went through.”

In a video posted to Facebook shortly after the verdict, Mr Jarratt and his wife were seen making a toast to his high-profile lawyer Christopher Murphy.

“To the godfather of law,” Mr Jarratt said.

The complainant alleged Mr Jarratt returned to an eastern Sydney share house from a dinner in 1976 and held her down while covering her mouth as he raped her.

She told the court Mr Jarratt remained fully clothed, smelled of alcohol, and she recalled freezing in fear.

But Mr Jarratt described the woman’s account as “fantasy” and said she lied to the jury about their “spontaneous” but consensual encounter.

“It was a form of seduction from her that I reacted to and one thing led to another,” he said.

Mr Jarratt said the woman beckoned him into a bedroom and had a conversation about making movies before telling him she thought he was attractive.

He said she told him to be quiet during their intercourse to avoid waking his wife, Rosa Miano.

Mr Jarratt also insisted he had not been drinking because he was driving that night.

The woman did not complain to police until late 2017, after being put in touch with journalists.

She told the court she had put the incident “in the back of [her] mind” and initially did not think police would believe her.

Mr Jarratt told police he first heard about the alleged rape claim, which he called a “scandalous lie”, when he read about it on the front page of a Sydney newspaper.

He was charged in 2018 and in a recorded interview played to court he read a statement to detectives describing the allegation as “sad and heartbreaking”.

Mr Jarratt’s barrister, Greg James QC, highlighted circumstances after the intercourse including that the woman allowed herself to be in a car and social settings with her accused rapist.

Mr Jarratt told Ms Miano about the infidelity during a “truth session” in 1984 as they attempted to resolve marital difficulties.

Ms Miano gave evidence that he did not go into the details because it was “too painful”, but Mr Jarratt was forced to confront each specific detail about the complainant’s accusations under cross examination.

“I didn’t rape her, so what you’re describing is fantasy to me,” he told the court.

She said although the pair portrayed horrific torture scenes in the 2005 film, Mr Jarratt expressed a “disgust” at violence and she trusted him absolutely on set.