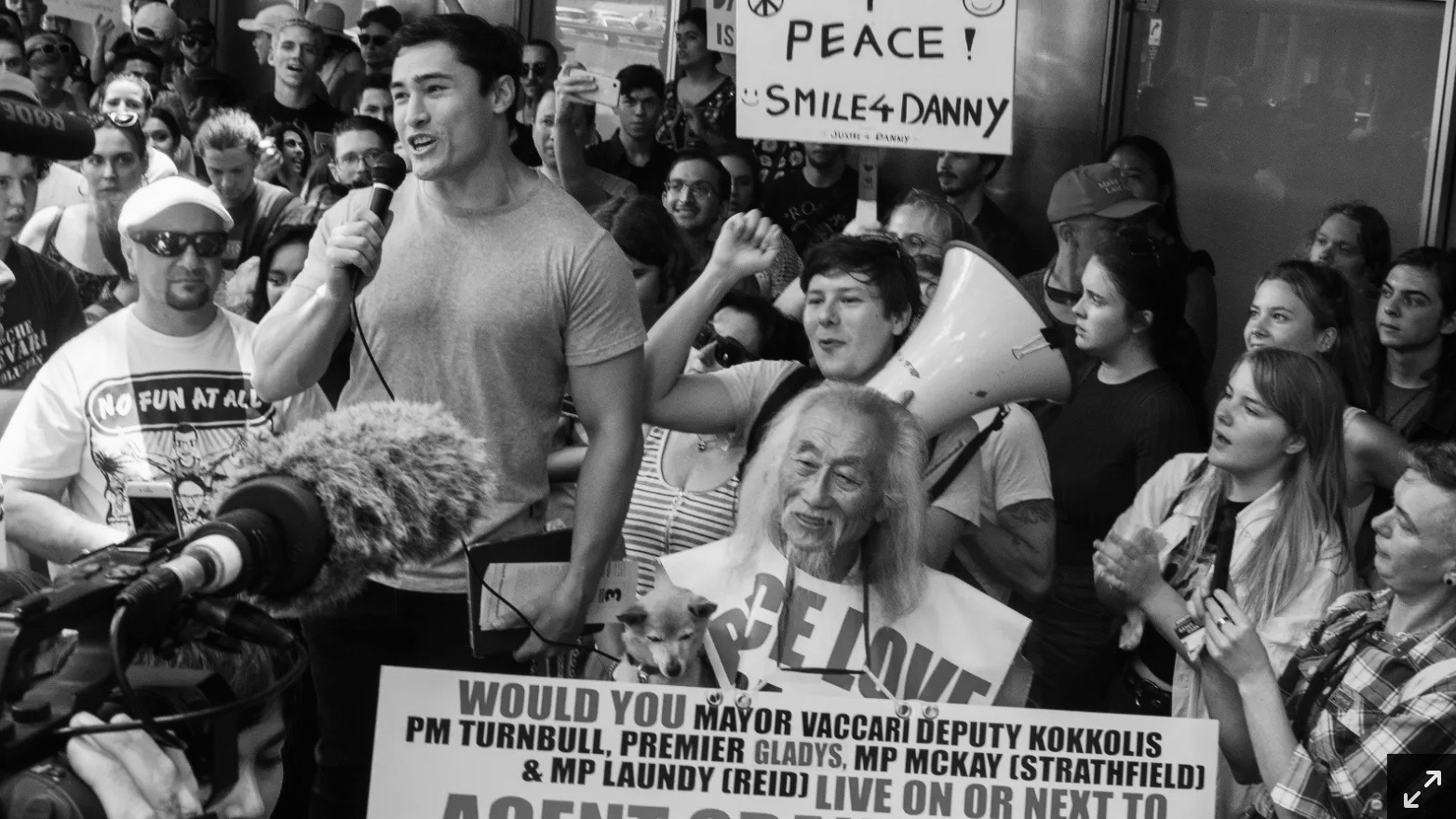 Sandwich-board activist Danny Lim is planning to take legal action against three Sydney police officers after he was arrested and charged for offensive behaviour in Barangaroo on Friday.

Hundreds of Sydneysiders took to Sydney Police Station during a protest on Sunday in support of the 74-year-old, who is best known for his social and political messages.

The former local councillor was arrested in Exchange Place at Barangaroo about 9.20am due to his sign stating “SMILE CVN’T! WHY CVN’T?”, with video of the incident reaching over a million views on Facebook.

Mr Lim’s lawyer, Bryan Wrench, said his client intends to fight the charge as well as action against the specific officers involved.

“What we’ve seen is just disproportionate conduct to the fine; he got arrested for trying to make people smile,” Mr Wrench said. “There was no respect shown to Mr Lim who is 74, instead they handcuffed him and threw him in the back of the paddy wagon.”

Niki Anstiss said the officers used “so much force” on Mr Lim, who released images of his bruised wrists after the arrest.

Mr Lim, wearing a large sign calling on politicians to act on chemical contaminations, thanked the crowd and those who had recorded his arrest on their phones.

“I couldn’t thank them enough,” he said.

“I asked for help, help, I told them I had to pick up my dog Smarty.”

Mr Lim says he has PTSD but urged people to “have a heart” and fight injustice for their children and grandchildren.

“The biggest injury which everyone must be able to take is when they try to break you, your mind, your heart, don’t let them do it,” he said.

Mr Wrench said he and Mr Lim have commenced legal action, and are currently awaiting a court date.

“There is obviously a lot of emotion out of it, but at the very least they should apologise to Mr Lim on how he was treated,” he said. “It’s unfortunate it has come to this because Danny has often sided and been a big supporter of the police.”

Since the protest, a GoFundMe page has also been set up in support of Mr Lim.

The charge comes after a District Court judge overturned a 2016 conviction and $500 fine against Mr Lim that was laid due to a sign mocking then-prime minister Tony Abbott.