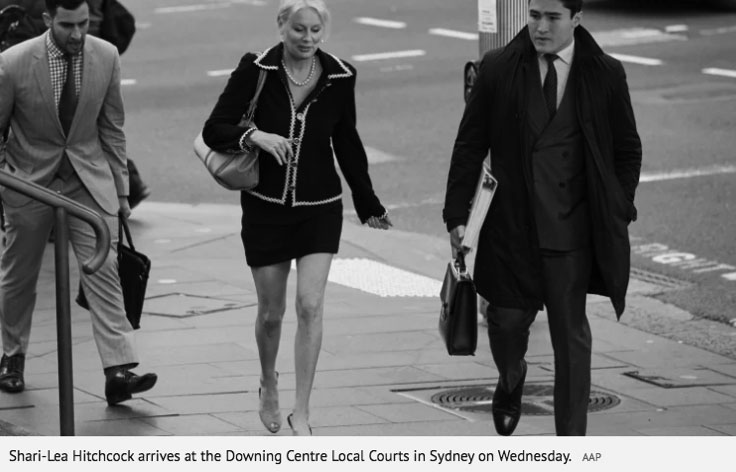 The longtime mistress of late cardboard billionaire Richard Pratt has had a conviction of assaulting a police officer overturned on appeal.

The longtime mistress of late cardboard billionaire Richard Pratt has had a conviction of assaulting a police officer overturned on appeal.

District Court Judge Garry Nielsen made the findings in favour of Shari-Lea Hitchcock this week, setting aside three convictions recorded by Magistrate Jennifer Atkinson in July 2018.

Hitchcock had been placed on good behaviour bonds over three offences following the March 2016 incident in Woollahra, including being accused of biting a police officer.

“In the circumstances how could any reasonable tribunal of fact, weighing and contrasting the evidence, determine beyond reasonable doubt that Constable (Kirsten) Gravolin and Constable (Jason) Eldridge were at all material times executing their duty?” Judge Neilsen wrote in his findings.

Hitchcock, 50, the mother of the billionaire’s fourth child, Paula, was handcuffed on the ground, placed in a police wagon and arrested after she had enjoyed a long-lunch with friends at The Centennial.

Hitchcock was handcuffed on the ground, placed in a police paddy wagon and arrested.

Police charged Hitchcock in March 2016 with common assault, assault police and resisting an officer in the execution of duty.

It was claimed that she twice kicked at officers and bit a female policewoman on her left knee.

The appeal, for which Hitchcock was represented by Bryan Wrench, was heard last May with Judge Neilsen delivering his findings on Tuesday.

“When your team manage to have the truth exposed it is a bitter sweet feeling because it takes a toll on you,” Hitchcock told The Daily Telegraph.

“It also affects your trust in strangers and trust of the police system. I’m also completely humbled by the judge’s extreme intelligence on appeal as he took extra time to see what really happened. I fail to how after I suffered permanent damage to my shoulder that I was arrested for assault.”

Hitchcock was left property and cash by Pratt when he died at the age of 74 in 2009 from prostate cancer.

In 2015, Paula Pratt and Hitchcock successfully challenged for a larger slice of the family fortune from Pratt’s widow and executor, Jeanne.