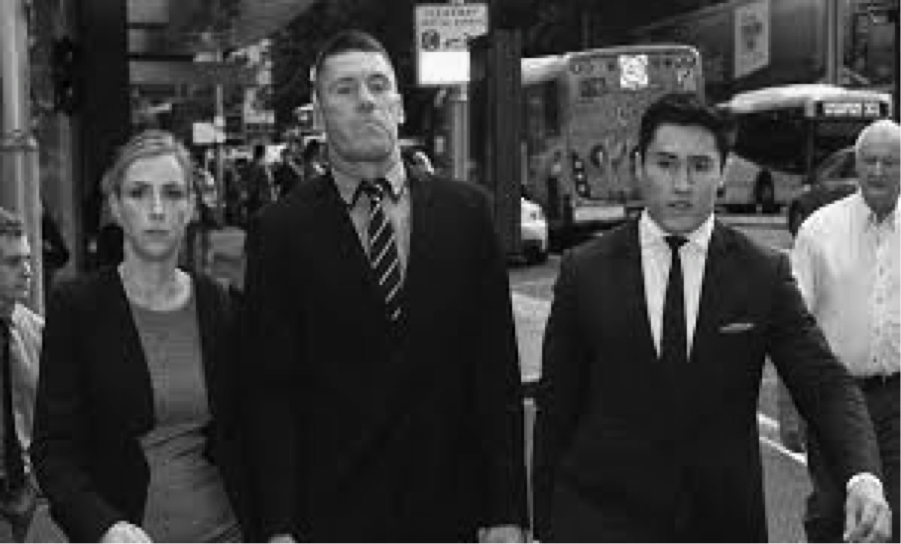 Kenny-Dowall, a star centre for the Roosters, was charged with one count of assault occasioning bodily harm and six counts of common assault.

Kenny-Dowall had also faced charges of stalking and intimidation, using a carriage service to menace and harass, and malicious damage to Ms Peris’s mobile phone.

The assaults were alleged to have occurred between October 2014 and June 2015.

He was found not guilty of all 11 charges.

But the magistrate found the couple had regularly engaged in mutually abusive text message exchanges.

The magistrate was highly critical of Ms Peris and said her evidence in court was “calculated, evasive and intentionally framed”.

“I did not find her to be an entirely truthful witness,” Magistrate Grogin said.

“Her answers on many occasions were framed by her to avoid a direct response and to provide her with a platform to make a speech.”

Ms Peris was not in court for the verdict.

Magistrate Grogin found Kenny-Dowall, who fought back tears in court as the verdict was delivered, was a man of good character.

He said good character, while not a defence, was taken into account in the magistrate’s verdict about whether the charges could be proven beyond reasonable doubt.

Mr Grogin accepted Kenny-Dowall’s assertions that in two of the alleged assaults, he was acting in self-defence in retaliating against Ms Peris during arguments.

In the case of other charges, the magistrate said there was insufficient evidence to convict and that he was left with “nothing more than suspicion”.

The verdict came after Kenny-Dowall denied he had ever assaulted Ms Peris and testified that he believed violence against women was “completely unacceptable”.

Ms Peris, the daughter of federal senator and Olympian Nova Peris, came under intense pressure in the witness box as her credibility was questioned by Ian Temby QC, the top barrister hired by Kenny-Dowall.

Mr Temby alleged in his closing submissions Ms Peris had filed the domestic violence complaint after being rebuffed by the Roosters rugby league club when she sought support following the break-up of her relationship with Kenny-Dowall.

It emerged during the hearing that Ms Peris had approached then-Roosters chief executive Brian Canavan, pleading with the club to take a stand on domestic violence and to support her with six months of accommodation and one month’s income after the split with Kenny-Dowall.

Mr Grogin said he found it “highly unusual” that Ms Peris had initially complained to the Roosters rather than police and said it adversely affected her credibility.

“I ask rhetorically, if a labourer or a lawyer or an apprentice were to have committed a domestic violence offence, would one expect the victim to approach the employers for such material support?” the magistrate said. “I think not.”

Kenny-Dowall’s lawyers described the approach to the club as “opportunistic and deceitful”.

The couple’s intimate text message exchanges and family finances also came under intense scrutiny during the case, which heard details of Kenny-Dowall paying Ms Peris a salary for helping him set up a cafe with cash that Ms Peris alleged came from a brown paper bag of $100 notes.

Ms Peris attempted to give evidence about the brown paper bag of cash during the case, but was prevented by the magistrate, who declared the issue irrelevant.

Kenny-Dowall will now enter the 2016 rugby league season with his name cleared.